The Great Battle of The Universe is an upcoming sci-fi, action, adventure film which is written by Kristoffer Stendal. Kristoffer Stendal is a man from Norway, looking to be a movie producer and show the story he wants to tell the world. The Great Battle of The Universe tells about an amazing story, where a person, named Commander Chris, coming to visit planet Earth and wants the humans to take part of a federation he have started to prevent harm of the future of The Universe. Commander Chris is an Alverian. Coming from a solarsystem located 1046 light-years away from Earth on a beautiful moon called Janus.

The main-person in the story, is named Chris. He is known as the Vice leader/Commander of Milky Way, and his own father is The Great leader of Milky Way. He died in a horrifying battle against an evil civilization from the Andromeda Galaxy. They shot down his spaceship. He then awakens on Earth, sent by his own Goddess of the planet Janus.

In 2040, Chris is being born on Earth. 14th of august, tuesday. He first don't know where he is. He starting asking questions of where he is, but then he realize where he is. He realizes that he is on Earth, why he is there. He is born as a human, but that doesn't take away his memory about where he is really coming from. Later in is childhood on Earth, when he grows older, his Earth-parents notice that he isn't like everyone else on Earth. He can't speak the language in the country he lives in. He only speak english and his own language, known as Janusian. Then FBI get known about this, and starting investigating it. They ask him a lot of questions of where he is from, who he are, and why he is on Earth. Later NASA get also known about this, and they and FBI need to hide the info about his identity.

And this is what is called, the battle of The Universe.=== 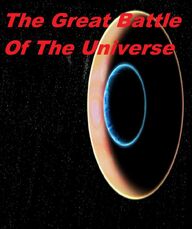